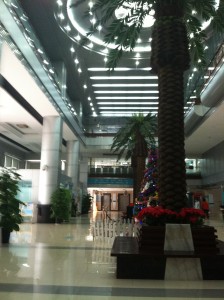 Our peaceful neighborhood is waking up. Somewhere down the street a Chinese flute is playing a wistful song.

At the risk of disturbing my roommate Louie, who seems to be able to still sleep, I want to get down some of what I’ve been processing.

Yesterday afternoon brought an opportunity to really find out more about what they’re doing here and truly get a handle on why it was worth it to come. Fe has done such a great job giving me an overview on why the Fuda program is so effective. She has carefully read all the literature so she understands the therapies and why they work. Fuda is terrific with patient education and has lots of printed materials excellently written and laid out so it’s very comprehendible.

At four in the afternoon we entered a whirlwind of activity that truly began to put the whole program together.

Mr. Li, who had picked us up from the airport, came to take us to Fuda’s second large new hospital, about twenty minutes freeway drive away. This state of the art, beautiful facility has all the latest cutting edge machines that are at the heart of Fuda’s cancer fighting arsenal. We had been invited to the exit interview where a patient is about to leave to go back home. All the doctors who’ve worked on the exiting patient gather together along with Fuda’s guiding president, Dr. Xu and his assistant and Vice President, Ester Law, along with the patients who are leaving. The doctors present an overview of the therapies used and comment on what they felt were most effect along with their opinions on future treatment follow ups. The patients participate, commenting on what they feel worked best and areas they are interested in pursuing. (At least this is what I understood from the interpreter at my side, filling me in). There seems to be a very honest look taken at exactly what was accomplished during the patients stay at Fuda, what the situation currently is, and what follow-up should be. The session we attended had two patients. One no longer had a tumor and one was being sent home to allow the implanted chemotherapies to work with plans for a return visit where new therapies would be applied, such as cryo. The director commented that the chemo treatment would kill the tumor cells but not the stem cells of the tumor and that’s why the cryo and immune building therapies were needed in the future.

I was asked to tell my story, which I did. It was later translated by the vice Pesident Ester who seemed truly moved I would come to Fuda to find out what they are doing here to be able to spread the word to other women in the west wanting to save their breast like I had done. There was a surreal quality to the situation as there was both a photographer and a videographer clicking away. Such attention!!

After this meeting we were invited into vice President’s, Ester’s, office to receive directly from her the hospital’s philosophy. She explained the Dr. Xu himself had been a cancer patient and now a survivor. The philosophy of treatment at Fuda came from that experience. She then did a beautiful job of explaining how traditional treatments of surgery, radiation and chemo can and do work on early stage cancer, which she estimated at about 20%. But that it’s the cancer that is not detected early, about 80%, that these treatments ultimately fail. (I don’t know how these statistics hold up for American women where early detection is promoted through yearly mammogram readings, but they seem to be very statistically based at Fuda). Now my true understanding of their philosophy began. Fuda has made it its mission to address the 80% cases that most likely have some metastasis. To do this they have added all the cutting edge technologies that exist in the world to day with an emphasis on boosting the immune system. (I can see why this makes sense here, as traditional Chinese medicine is a system that works by assisting and stimulating the immune system).

No one gets sick here when getting chemo drugs. Those drugs are applied internally, right at the cancer site. Afterwards, the patient is given vitamin IV’s to prevent reactions such as loosing the hair and getting nauseous. Ester explained that a lot of patients using traditional approaches die because the body’s best fighter, the immune system, is not functioning and gets very damaged from chemo. At Fuda if chemo is used it’s done in a way to prevent that.

Cryo ablation is the third additional tool Fuda uses to both kill the cancer and stimulate the immunity. A later power point presentation in Dr. Xu’s office showed pictures of secondary sights gone after a patient’s initial cryo in a primary area. So impressive!!

Then, as if it was scripted to happen at that moment, a beautiful woman from Manila entered Dr. Xu’s office to say good-by and offered us her story, one that would put everything I’d just learned together on a human face. Her name was Theresa and she had just finished a shopping trip with her sister before going home early to Manila after hearing she had no more cancer left to treat.

Later, at a wonderful dinner Fuda’s Filipino coordinator, Segundo, took us to at the beautiful Imperial Hotel, we learned that she had entered her treatment very depressed and was encouraged at Fuda to fight! Segundo told us her transformation was really quite remarkable. I keep thinking about her happy face and how she is going home to a loving husband who now has his beautiful wife back healthy and happy, and two her wonderful children who now have their mama ready to guide them fully to adulthood.

It’s all those heart relationships that brought Louie and I here. It was Fe’s family, calling me on her behalf, so full of fear and wanting hope. Fe’s taught me a lot about how family relationships work in this part of the world. She herself was born in the Filipinas, the baby in a family of nine children. She was given her education, becoming Chemical engineer, through the hard work of her siblings, all working to give money towards each other’s education. When a good living wage became hard to come by in the Filipinos, she took work as a domestic in wealthy Hong Kong, all so she could pay it forward to younger relative’s educations. When illness strikes, they also band together, sending relatives to wherever it takes to get the best treatment.

Fe is something of an ambassador. While she was getting her imaging and beginning her chemo implant treatments, she spent her first weeks at Fuda going around to visit the other patients to get their stories and encourage their progress. She found people from her home country as well as Manila, Indonesia, Russia and the Middle East. She got stories about their cancer and found out they are not rich people. But they are rich in their heart relations with each other, which is what ultimately brought them here,. They are cherished. They are valued. Through their loved one’s assets, including companionship, they work something like the immune system itself, pulling together everything to fight through the illness of cancer back to health again. Fe has watched miracles taking place on a day-by-day basis. Those going back home now healthy kept coming by her room to share a moment of victory over the cancer foe, and to wish her well in her fight. How utterly beautiful! This hospital that attracts cancer’s worst victims is not a place of sadness and darkness. No! It’s a place of hope and love and light! It’s a place of NOW, minute by minute. The doctors at Fuda believe each day the blood is different. Each day offers a new opportunity for health. That is certainly something I will take away with me back to the states.

It was so beautiful driving around the city last night with Segundo. Guangzhou itself is magnificent!! The shapes of the building are original, at least to my eyes. The tops of them are illuminated at night, each with it’s own personality. There is a space-age looking tower dominating the skyline off by itself. At night it is lit up with a changing pattern of moving color light, most dazzling and beautiful. We haven’t seen hardly any westerners, but the Chinese don’t seem to pay much attention to any differences we represent. It’s easy to feel at home. In fact, there are Christmas decorations everywhere. Last night at dinner the restaurant had Christmas music playing. Segundo told us that there are two Catholic churches in town that are mostly attended by Filipinos. It’s odd to have Christmas as cultural phenomena, disassociated from the good-will-towards-men sentiment I’m used to it representing. The Christmas spirit is in my heart however. What ever are the energies or motives that brought Louie and I to China right now, I have to believe that spirit of brother and sisterhood was part of it.